Today has been one long long day and it is just Monday – I am no mood for jokes or any sort of fun 😦 And I found the right sorta company – the anti-joke chicken. Exactly what I was looking for – seriously. 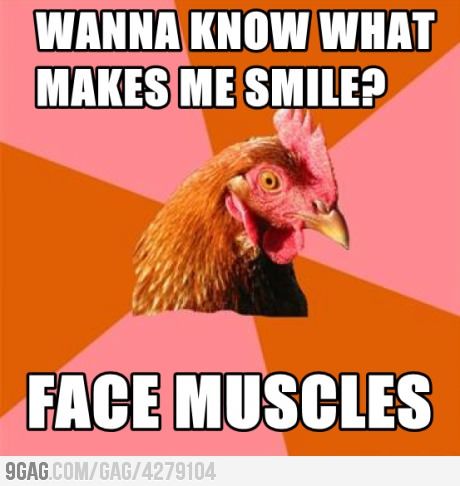 Exactly 😀 So got it? Okay this one is easy – no cheating huh 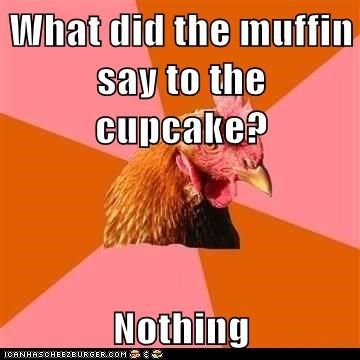 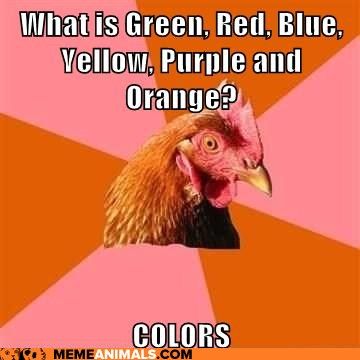 I got this one! 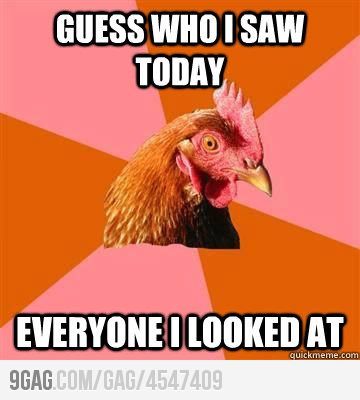 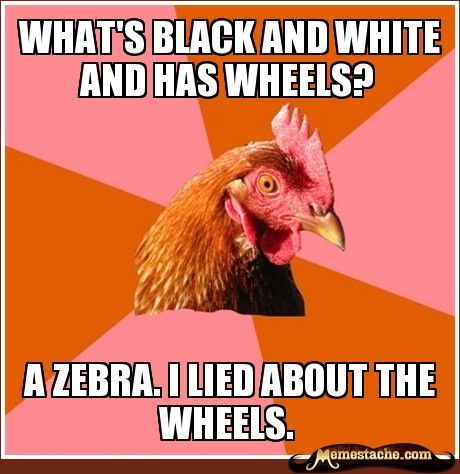 I saved the best one (my favorite) for the last – a news article that I read earlier this week. Okay I dont understand much of football but imagine this scene – two teams are playing and no goal is scored in the first 120 minutes.

But natural to want to find a scapegoat, somebody to blame…

Who would you blame?

“It is too light… moves all over the place, it is not a good ball.”

Hope you found something that you enjoyed – none of which are mine by the way. I found them on the internet and am just keeping the fun going.

Hello all! Anybody miss me? Ah well, I did. But life happens and we cannot always have everything can we? Anyway I snatched a few moments and thought of marking my attendance with Cee’s Black and White Challenge which is Bricks or Stones. As I mentioned in my earlier Ivory post, I had a selection of statues and idols.

Devi Durga the vanquisher of Evil (Mahishasur) – her strength, her shakti (power) comes across despite the desecration does it not? Just like it does from the millions of women oppressed and abused all over the world.

A stone idol of perhaps a warrior princess? These images are from the collection at Salar Jung Museum at Hyderabad, India.

I had initially thought this idol to be of a king – Chandrasekhara. But four arms and the lack of any jewelry and simple attire made me rethink. He is Lord Shiva the one who wears the Moon on his matted locks. Apologies for the blurred picture.

Nandi the sacred steed, constant companion and ardent devotee of Lord Shiva. It is said that even if the Lord does not hear your prayer anything that is whispered in Nandi’s ear is sure to reach the ears of the Lord Himself. The white color apparently symbolizes purity, righteousness and devotion. Although I am not so convinced for most of Nandi’s idols are in black stone.

The more famous form of lord Shiva as Nataraja (the Lord of dance). Did you know that at CERN the European Council for Nuclear Research there is a statue of the Nataraja? As a plaque alongside the statue explains, the belief is that Lord Shiva danced the Universe into existence, motivates it, and will eventually extinguish it.

The Nataraja idol typically shows Shiva dancing in one of the dance poses, holding fire (as he is the God of destruction) in his left back hand, the front hand is raised in blessing, the front right hand with a wrapped snake that is in abhaya (fear not) mudra while pointing to a Sutra text, and the back hand holding a damru (a small drum like musical instrument) the sound of which created the universe. He is surrounded by a ring of flames, standing on a lotus pedestal, lifting his left leg (or in rare cases, the right leg) and balancing over a demon dwarf Apasmara (not a child!) who symbolizes ignorance.

The much loved and popular Lord Krishna. Again apologies (a blanket apology!) for the poor quality photos 😦

Another statue of Lord Vishnu the Preserver in the shayanmudra (reclining pose) with his ten avatars carved on top. At least that is what it looks like. The one on the horse (on the extreme right) is the Kalki avatar (destroyer of filth) foretold to appear to at the end of the kali yug the present epoch.

she reaches for the sky

all the while attempting to

conceal her scars and wounds

Doesn’t she look as if she is trying to cover her naked ‘ugliness’ with the money plant? Clearly she’s been around humans for far too long 😉

Hello! Phew what a week that was almost glad that all the fun, frolic is over – at least for now. Hey wait – I just remembered, there’s some more fun, right here right now! 😀 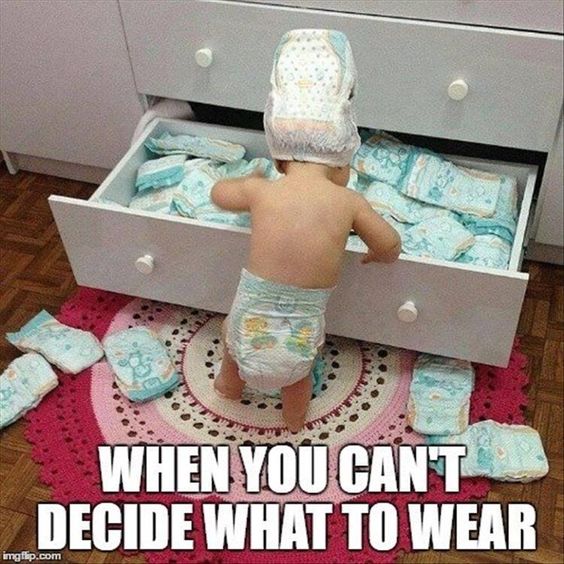 Tell me do you also stress over what to wear before a party? I can never remember which sari I have worn where, especially if it is one of my favorites. What about you? How do you remember? Care to share any tips? Very much needed for now it’s the wedding season. Invitations will be sent out by the dozen, some usual, some not so…

That sets the bar 😉 But I am disappointed at their un-innovativeness – where’s the glass? Anyway, their problem right? The water reminds me of this one

Hmm I didnt know water could weigh so much – maybe I should start skipping the water 😉 But is that 80% or 90%? 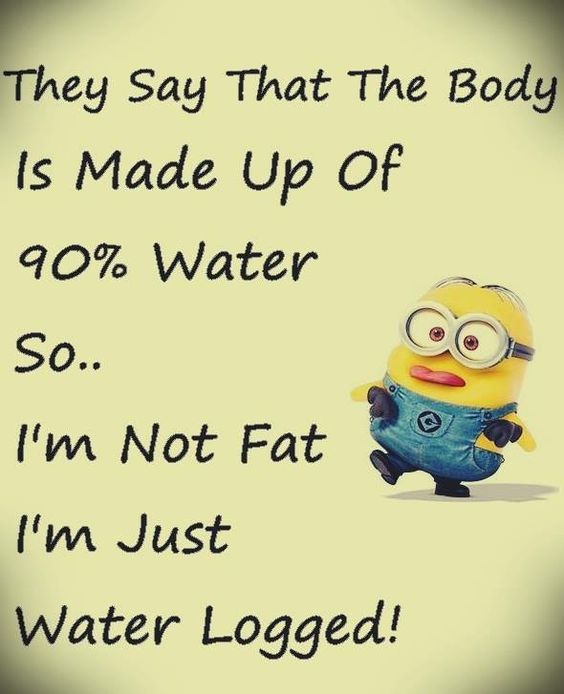 Whatever, I am sure I would be size zero but for the water 😀 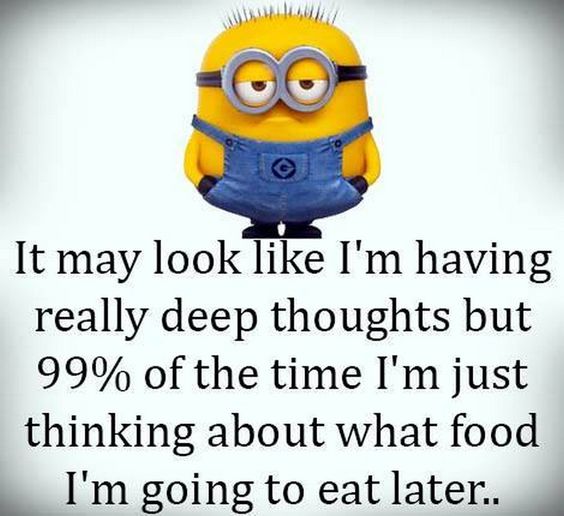 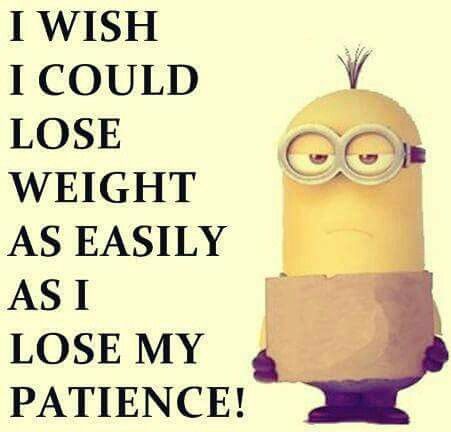 Or my car keys or my way or my mind. Just shows I am getting old, I guess. 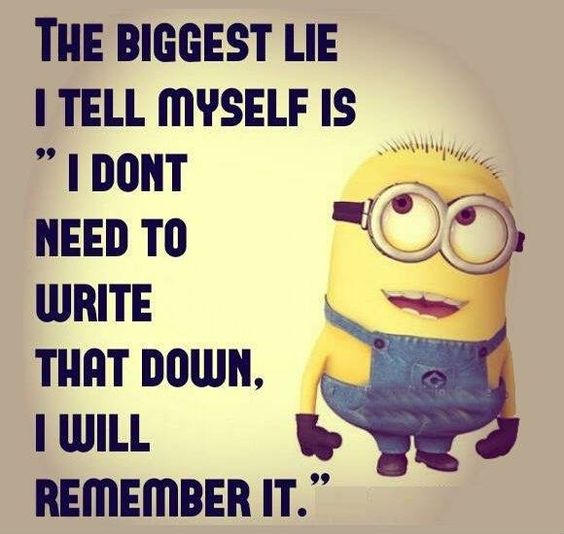 Have you reached that stage yet?  Err umm what was I saying? Oh well, see you soon – my place or yours 😉

Hope you found something that you enjoyed – none of which are mine by the way. I found them on the Pinterest and am just keeping the fun going.

Cee’s alphabetical fun foto challenge this week is about the letter I. Early on this year, I had the opportunity to visit one of largest museums of the world – the Salar Jung Museum. It is also the  largest one-man collection of antiques in the world. It is well known throughout India for its prized collections belonging to different civilizations dating back to the 1st century. For this challenge I was spoilt for choice – idols or ivory. I settled for the latter and about the former, I shall wait for another suitable time or even go for a double post. That is if you are interested. Do let me know. But first a glimpse of the ivory collection at the museum, which houses pieces from all over the world

Marvelous detailing. And apologies for the shadow work 😦 Must learn how to avoid that – any tips/resources?

Look at the petals, the hairdo, the design on the robes…

Gods and Goddess from India

Even a whole chair

From what are just teeth.

Despite the art and the fine workmanship I could not but shudder – how many elephants lost their lives just to be a showpiece?

Isn’t that the most beautiful picture of all – wild free majestic how they were made.

Thank you for visiting.

At first she grew in another garden.

Lush green and sprightly, she swayed with the winds, laughing at the elements as they cared for her like their own.

She was meant for another garden.

It was her prarabhda* to nurture and provide for strangers, to steer them through strife, storm and drought.

Her roots held them together.

Bound and unable to leave she withstood the onslaught of the changing seasons -waiting and hoping for eternal spring.

Years and they passed her by: demanding using cutting slicing.

Until she stopped waiting.

There was beauty in fall too.

A/N: Prarabdha is a Sanskrit word meaning commenced or begun. Prarabdha is one of three types of karma (originating from the root kri, meaning to act).

The others are sanchita karma – sum of all karma that has been collected; kriyamana karma, or agami – karma that is currently being created and will yield results in the future.

In Vedantic literature, there is a beautiful analogy. The bowman has already sent an arrow and it has left his hands. He cannot recall it. He is about to shoot another arrow. The bundle of arrows in the quiver on his back is the sanchita; the arrow he has shot is prarabhda; and the arrow, which he is about to shoot from his bow, is agami. Of these, he has perfect control over the sanchita and the agami, but he must surely work out his prarabdha.

Prarabdha karma is only exhausted after its consequences have been experienced or its debts paid. There are three types of this karma:

The yogi who has achieved union with the Higher Self does not experience ichha prarabdha karma but is still subject to anichha and pareccha.

This is my second offering to this week’s Friday Fictioneer’s – sorry I couldn’t resist 🙂 The first one is here but they aren’t interlinked.

Written for Friday Fictioneers – a story in 100 words or less. Thanks to Rochelle for hosting the challenge and Sandra Crook for the beautiful photo. To read the other stories inspired by this prompt click here.

“It is customary to bring prospective grooms here to pay obeisance.” She said.

He folded his hands and bowed.

“The tree has supernatural powers.” Her voice dropped to a whisper. “She turns evil grooms turn into stones.”

“That stone on the far right? That’s my last suitor.”

“Ask Granny about that stone in the middle. He had his eyes on her property.”

“When Radha’s husband demanded dowry, she brought him here.” She pointed.

“Why are you worried?” she snuggled up to him.

Another fool after her millions she snickered.

I have two submissions this to week’s Friday Fictioneer’s – sorry I couldn’t resist 🙂 The other one is here but they aren’t interlinked.

Written for Friday Fictioneers – a story in 100 words or less. Thanks to Rochelle for hosting the challenge and Sandra Crook for the beautiful photo. To read the other stories inspired by this prompt click here.

Before, When There was Nothing

“Mother!” Shvetaketu was aghast. “What are you doing with him?”

“Isn’t it obvious?” Her face was still flushed with passion.

“Mine.” She straightened and smiled at him affectionately.

“I demand you tell me.” He roared.

“I shall rewrite the marriage laws.” Shvetaketu declared. “From now on you can go to other men only with your husband’s permission.”

“You will still not know whose son you are.” She twinkled.

“But of course your husband’s. He owns you like his fields and any crop that comes out of you is his.”

“So be it. From now on you will be allowed only four husbands, the Moon, Gandharva Vishvavasu, Agnideva and finally your husband.”

Is that why when husbands no longer want their wives she is passed on to fire?

A/N: In Hindu mythology, Gandharva Vishvavasu is a celestial being skilled in the art of music and Agnideva is the god of Fire. This piece is inspired by Devdutt Patnaik’s book 7 Secrets of the Goddess, which describes the origin of this Vedic wedding ritual. Until now I wasn’t aware that I have four husbands. Did any of you (wedded according to Vedic customs) know it?

Written for What Pegman Saw – a story in 150 words or less.  Thanks to J Hardy Carroll for hosting the challenge and Google Maps for the photo prompt. To read the other stories inspired by this prompt click here.

Thank you for reading. I dithered quite a bit over the title – could you help me? Do you think it would have been better if I had titled it The Evolution of Civilization?

The Evolution of Civilization