Hello all! Anybody miss me? Ah well, I did. But life happens and we cannot always have everything can we? Anyway I snatched a few moments and thought of marking my attendance with Cee’s Black and White Challenge which is Bricks or Stones. As I mentioned in my earlier Ivory post, I had a selection of statues and idols.

Devi Durga the vanquisher of Evil (Mahishasur) – her strength, her shakti (power) comes across despite the desecration does it not? Just like it does from the millions of women oppressed and abused all over the world.

A stone idol of perhaps a warrior princess? These images are from the collection at Salar Jung Museum at Hyderabad, India.

I had initially thought this idol to be of a king – Chandrasekhara. But four arms and the lack of any jewelry and simple attire made me rethink. He is Lord Shiva the one who wears the Moon on his matted locks. Apologies for the blurred picture.

Nandi the sacred steed, constant companion and ardent devotee of Lord Shiva. It is said that even if the Lord does not hear your prayer anything that is whispered in Nandi’s ear is sure to reach the ears of the Lord Himself. The white color apparently symbolizes purity, righteousness and devotion. Although I am not so convinced for most of Nandi’s idols are in black stone.

The more famous form of lord Shiva as Nataraja (the Lord of dance). Did you know that at CERN the European Council for Nuclear Research there is a statue of the Nataraja? As a plaque alongside the statue explains, the belief is that Lord Shiva danced the Universe into existence, motivates it, and will eventually extinguish it.

The Nataraja idol typically shows Shiva dancing in one of the dance poses, holding fire (as he is the God of destruction) in his left back hand, the front hand is raised in blessing, the front right hand with a wrapped snake that is in abhaya (fear not) mudra while pointing to a Sutra text, and the back hand holding a damru (a small drum like musical instrument) the sound of which created the universe. He is surrounded by a ring of flames, standing on a lotus pedestal, lifting his left leg (or in rare cases, the right leg) and balancing over a demon dwarf Apasmara (not a child!) who symbolizes ignorance. 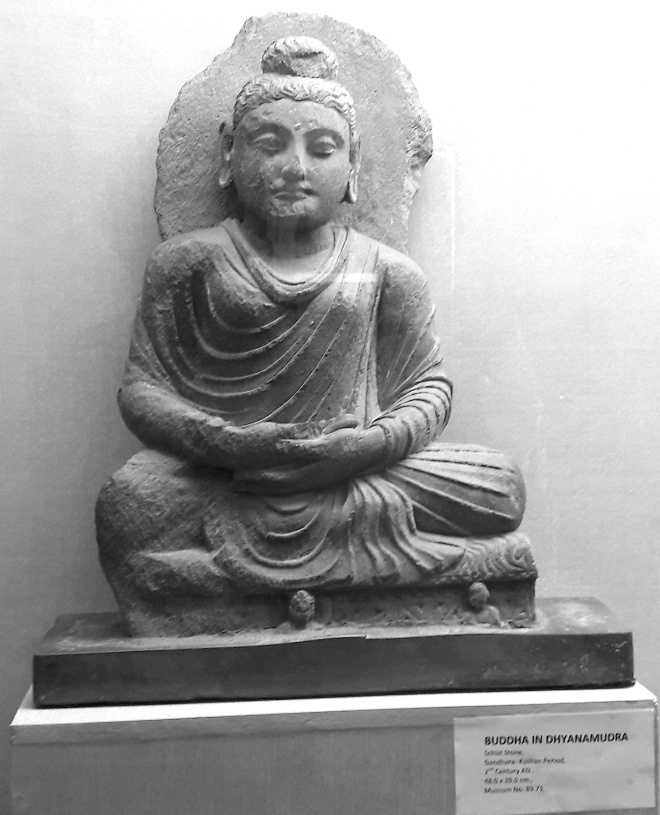 The much loved and popular Lord Krishna. Again apologies (a blanket apology!) for the poor quality photos 😦

Another statue of Lord Vishnu the Preserver in the shayanmudra (reclining pose) with his ten avatars carved on top. At least that is what it looks like. The one on the horse (on the extreme right) is the Kalki avatar (destroyer of filth) foretold to appear to at the end of the kali yug the present epoch.

Cee’s alphabetical fun foto challenge this week is about the letter I. Early on this year, I had the opportunity to visit one of largest museums of the world – the Salar Jung Museum. It is also the  largest one-man collection of antiques in the world. It is well known throughout India for its prized collections belonging to different civilizations dating back to the 1st century. For this challenge I was spoilt for choice – idols or ivory. I settled for the latter and about the former, I shall wait for another suitable time or even go for a double post. That is if you are interested. Do let me know. But first a glimpse of the ivory collection at the museum, which houses pieces from all over the world 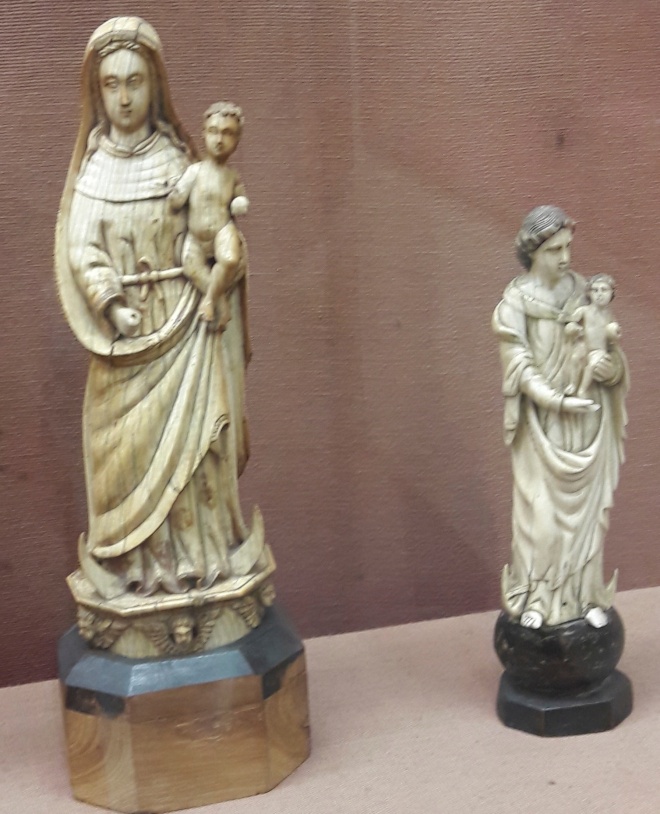 Marvelous detailing. And apologies for the shadow work 😦 Must learn how to avoid that – any tips/resources?

Look at the petals, the hairdo, the design on the robes…

Gods and Goddess from India 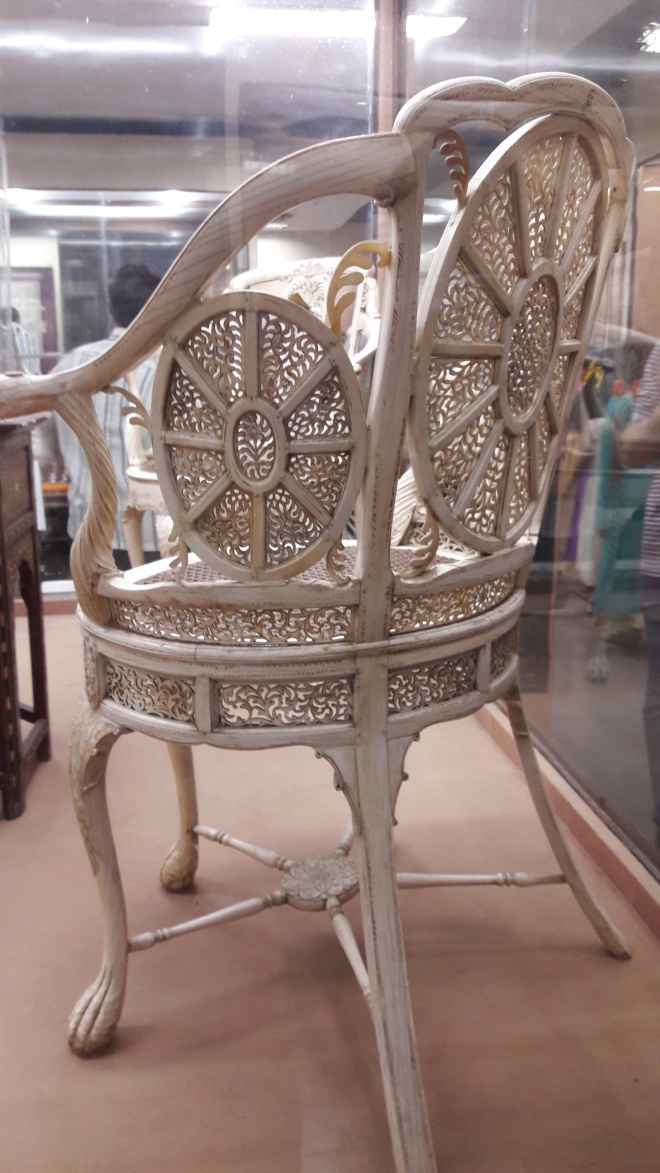 Even a whole chair 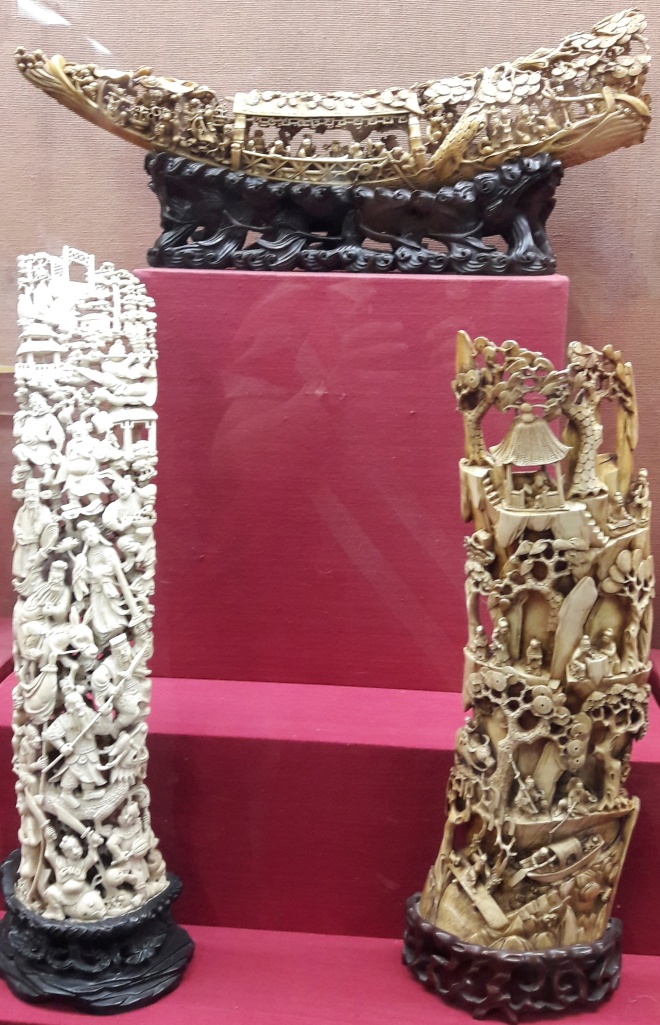 From what are just teeth.

Despite the art and the fine workmanship I could not but shudder – how many elephants lost their lives just to be a showpiece?

Isn’t that the most beautiful picture of all – wild free majestic how they were made.

Thank you for visiting.