Just a couple of weeks ago when temperatures were touching 46o C a dust storm came up to settle scores with the blazing Sun (and my sinuses 😉 ). 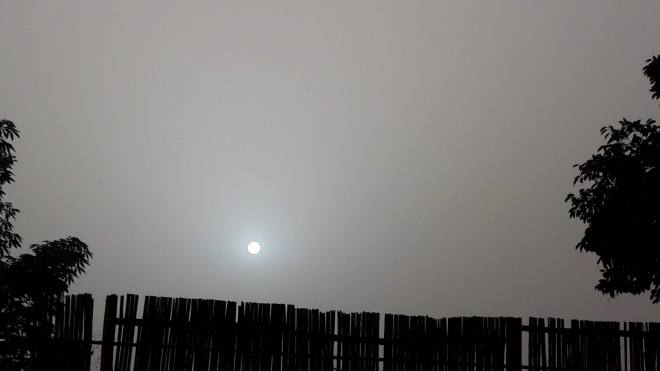 It was quite a sight to catch a glimpse of a Sun as cool as the Moon, only rounder and unblemished just before it retired hurt for the day. 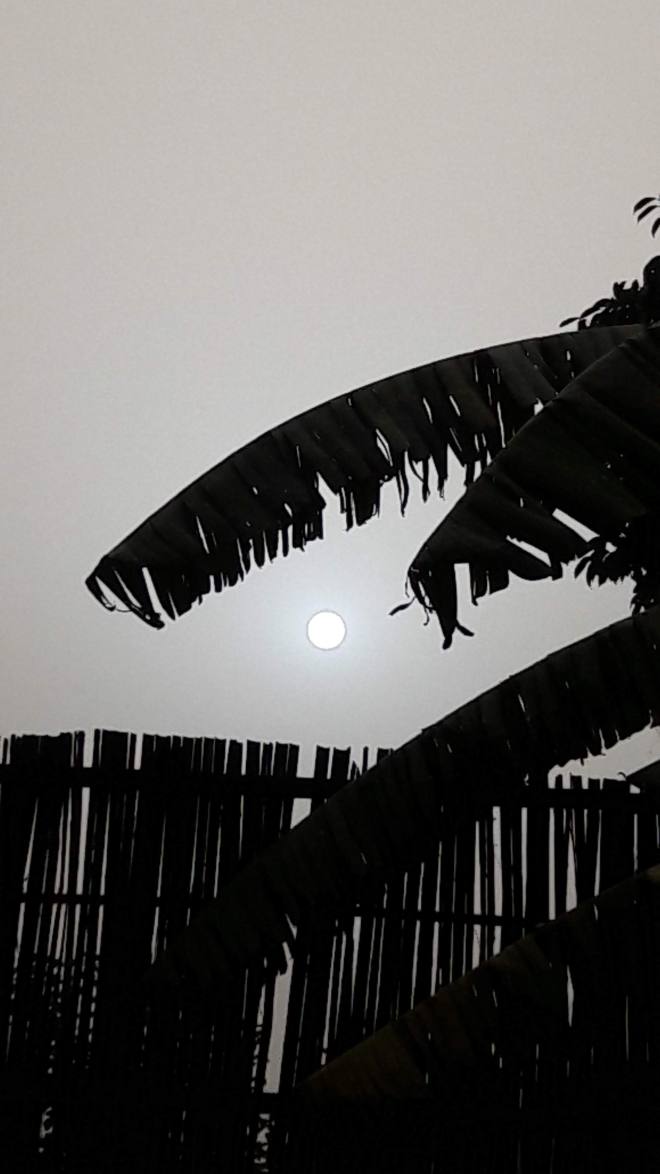 The banana tree bows in homage to their Sustainer and Provider. 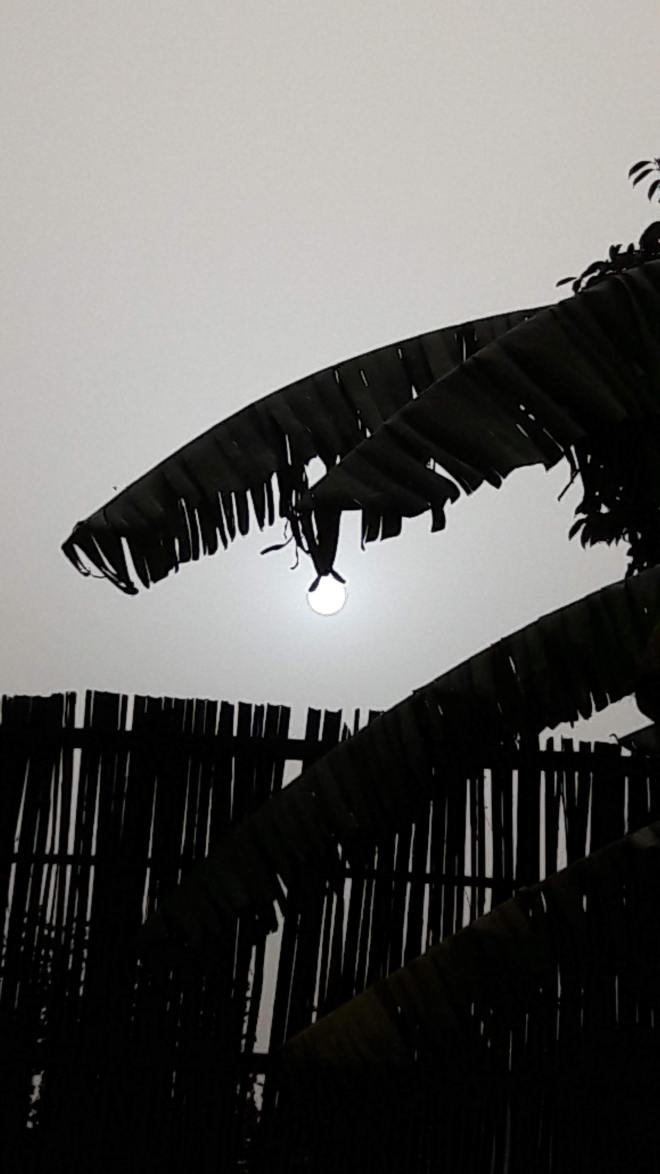 Or does it have ambitions of swallowing it up while it is down and out?

Hope you enjoyed these shots of the summer sun. I am happy to be able to contribute something to one of Cee’s photo challenges after a long time 🙂

Three things cannot be hidden long: the sun, the moon and the truth – Buddha

But first some good news! After days of patiently putting up with my rants about the weather you certainly deserve it 🙂 I am pleased to report that finally the weather has take a turn for the better. Believe it or not, on Monday, the temperatures plummeted from a sizzling day temperatures of 47 0 C to a pleasant evening at 27 0 C.

A thunderstorm accompanied by a shower overcame the sun (for the moment at least) and brought cheer right back into our lives. Even the staid seasoned trees look positively thrilled – clean green and fresh. I cant help but be infected by their silent but all pervading joie-de-vivre.

On the flip side, several flights were delayed or cancelled. But the respite couldn’t have come at a more timely juncture. Things were quite awful in most parts of the country and temperatures at the India-Pakistan border were higher by 10 degrees or more. Actually am not sure there has been any relief for the army jawans who patrol the borders in the most unbelievable heat and dust of the Thar desert. According to newspaper reports, they were able to roast papad by just placing it on the hot sand and cook rice by just keeping it out in the sun for 3 hours.

And then there was this tragic incident. A villager, while entertaining guests, forgot about his camel left out in the heat with his legs tied. When he remembered and went out to release it the camel turned violent. He picked him by the neck and threw him down, he then chewed off his master’s head. The camel went berserk and 25 men struggled for over 6 hours to bring it back under control. Poor camel – the heat must have literally fried his brains (my sympathies and condolences to the villager’s family).

That’s all on the weather front for now at least – for this isn’t the end of summer. So as they say cheer up the worst is yet to come. And memes like this are bound to crop up (again and again) before the mangoes bid their final adieu for the season.

And now on to Moonshine – Chapter 61 and Calvin. All those rooting for Hobbes raise your hands 😀

Quotes for the day

“Don’t knock the weather. If it didn’t change once in a while, nine out of ten people couldn’t start a conversation.” ― Kim Hubbard

Before you go, do leave me a note, about the weather if nothing else (go ahead make me nervous)

It’s awfully hot (470 C/117 0 F with 60 % humidity) and there’s no sign (or hope) of any let up. I wonder how long people (and the birds and animals) can keep up in the face of this relentless blistering blazing sun. Something is surely going to give and soon. So far electricity is on our side (touch wood and fingers crossed) but with demands and loads soaring, a breakdown not only seems inevitable but imminent.

And somewhere I feel guilty – it wasn’t this bad just a few days ago. Methinks the sun got a bit cheesed off on my obvious partial and support for the amaltas and decided to show  who the boss actually was. As a result, despite me bragging that I wouldn’t miss the unfolding spectacle for anything, I am now ensconced in the darkest corner of my house, curtains tightly drawn to keep out the sun, light and view.

The irony of it didn’t escape me:

The only good thing is that I managed to come up with a half way decent haiku! And get the stamp of approval from the reigning Haiku Queen herself (after a bit of rewriting of course).

Wondering who the Haiku Queen is?

She is none other than our very own smr. She won this year’s grand prize winner of the prestigious IAFOR Vladimir Devidé Haiku Award 2016 (no surprise for me – I always knew she was brilliant).

Her submission was chosen as the best one out of a record 680 submissions from 60 different countries. My heartiest congratulations to her and best wishes for many more such finely crafted gems.

The other submissions are pretty awesome too – if any of you enjoy haiku it is worth it to check out the link above. And if you like, you can read more of smr’s awesome haiku and even better tanka (and some pretty cool poems) at Allpoetry.com. Registration (though free) is mandatory.

On to Calvin now  – he is feeling pretty neglected I can tell especially what with Hobbes ragging him no end.

Quote for the day: “One ought, every day at least, to hear a little song, read a good poem, see a fine picture, and, if it were possible, to speak a few reasonable words.”  JW Goethe.

I know Moonshine does quite measure up to any of the above but still if you insist 😉 here is Chapter 60: Making Dreams Come True

As usual, I look forward to your comments and smileys 🙂

Not so long ago, just two months ago to be more precise, I was busy Chasing Spring – remember? And I had hinted then that I was hot on the trail of something else as well. It is time for the unveiling.

I was trying to track Mother Nature as she dealt with the changing seasons – the bitter chill and frost of the winter to the unrelenting merciless sun rays  – with her usual no-nonsense nonchalance and elan.

Tip: Taking a leaf from Mother Nature’s kitty, for best results, scroll down at a leisurely pace. 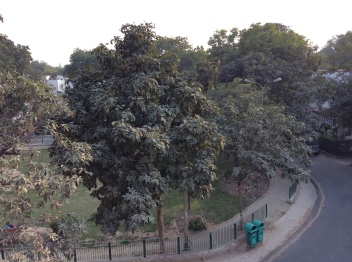 And then comes the next set taken about exactly a month later, i.e on or around 12th of April 2016 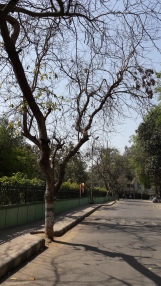 She waits for her time 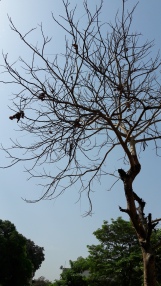 Or is this the end?

The temperatures skyrocketed as we slipped into May. Whilst mere mortals writhed and groaned under the weight of the blazing sun, she decided if you can’t beat them join them. 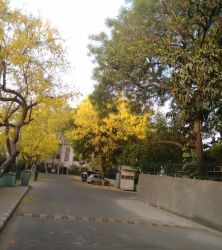 Further down the road

Where have all the branches gone? 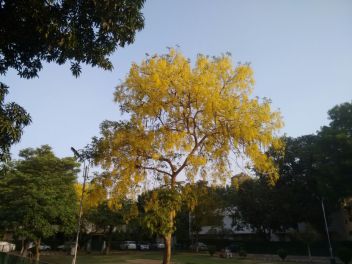 And the winner is….

I dare not draw the curtains even in this heat for fear of missing out the breathtaking sight of the Amaltas in full glorious bloom – enough left over to carpet the roads as well.

I am completely bowled over, fascinated and enthralled by the complete wardrobe overhaul without moving an inch!

And all from thin air…

I wonder if trees get a headache while in the sun? If not, I am all for being born as a tree in my next life 😀

After this, I wouldnt blame you if you didnt much care for Rajani’s escapades – well anyhow here’s Chapter 59.

And a bonus short story – The Trap – do let me know what you think!

The dreaded week is upon us – according to Met predictions, for the next 7 days (or more) maximum temperatures in Delhi will hover around 44-46o C (111 -115 o F). In fact most of the country is reeling under the heat wave which has already killed hundreds. At least I have the luxury of staying indoors – what about the millions who have to brave the heat and haze minus water and electricity?

Why just India? Entire South – East Asia is struggling to cope with widespread drought, severe heat and water shortages which are disrupting normal life, killing people and animals and destroying crops. Do watch the CNN clip on the Mideast’s drought worst in 900 years. Here’s an out of the box (rather ‘in the box’) take on global warming.

And then was this lecture at MIT linking global warming to Islamophobia. The article has enough links obviating any need to add my two cents worth. Besides what do I know – except that global warming has roasted, toasted, grilled, steamed, fried my brains for sure 😉

Have a super weekend and see you all on Monday – and for readers of Moonshine here is Chapter 58: Harried 🙂

Quote for the day:“The heat made people crazy. They woke from their damp bedsheets and went in search of a glass of water, surprised to find that when their vision cleared, they were holding instead the gun they kept hidden in the bookcase.” ― Kristin Hannah, Summer Island

Hello peepools! How you doin? Better, one hopes, now that spring is in the air and summer is hot at our heels. In Delhi, this is probably the best time of the year – flowers blooming, the skyline dotted with flame of the forest. Delhites, take a moment, to look at the horizon while you travel to work or go back home – you can’t miss the red blooms that pop up from the most unexpected and drab buildings. Trust me, it’s not a sight to be missed.

Every year, Delhi just seems to burst into a riot of color almost overnight. This year I was determined to stalk it – almost missed it, but managed to catch the tail of the fire. Have a look.

Looking awesome isn’t it? But then look what happened today!

Back to dull and dreary. A unseasonal storm blew away the colors of spring too 😦

What about your place? Anything special going on over there? Like to share something? Come on say something – anything. Feels rather awkward – to be the only one blabbering on and on 😀

Oh well, here I go again – Chapter 43 but before that let Calvin fill in the awkward silence shall we?

And anyone care for the Blog Index?

Thought for the day

No winter lasts forever; no spring skips its turn. Hal Borland
And I wait in a fever of impatience.
Edit: Btw, hope you didnt miss the mango blossoms? Yummmm 😉