Hello to everybody and welcome to another round of Cee’s Fun Foto Challenge. This week’s theme is Bridges. For this challenge, I have chosen two remarkable bridges – one that is built and the other grown. Don’t quite get what I mean? Scroll down.

Øresund Bridge between Sweden and Denmark. Pic taken from the Swedish side.

Øresund Bridge, an engineering marvel,  is the world’s longest cable-stayed bridge for both road and railway. The bridge connects the Swedish city Malmo to Copenhagen the capital of Denmark. Running across the Øresund strait, the bridge, consists of 3 parts – a bridge, an artificial island and a tunnel.  It runs nearly 8 kilometres from the Swedish coast to the artificial island of Peberholm in the middle of the strait and goes underground before emerging in Denmark – it looks pretty cool from the air. Unfortunately I don’t have a picture of that but you can have a look here and you can read more about it here.

And as I said, my next bridge is one that isn’t built but grown – have a look 🙂 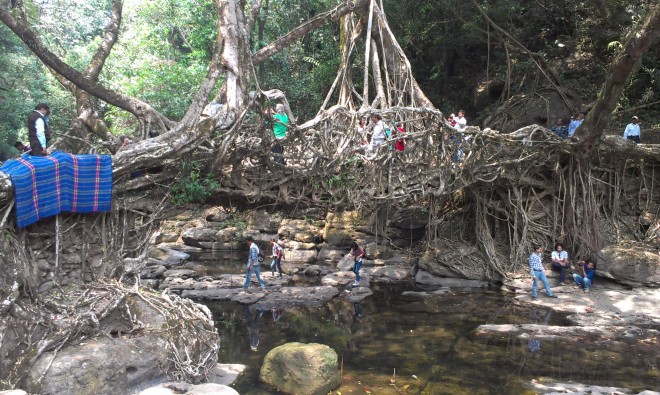 The living root bridges Meghalaya (or Abode of Clouds) one of the seven sisters of the North Eastern states of India, are one of a kind in the world and are a sight to behold.   These handmade living root bridges are tangles of massive thick roots, which have been intermingled to form a bridge that can hold several people at a time. The trek to these bridges is pretty steep (at least by my standards) so despite going to Mawlynnong, to my everlasting regret, I didn’t actually see these marvelous structures and instead had to rely on the pictures which our son clicked.

The local Khasi people are experts at ‘growing’ these bridges. They make the pliable tree roots to grow through betel tree trunks which have been placed across rivers and streams until the figs roots attach themselves to the other side. Sticks, stones, and other objects are used to stabilize the growing bridge. The root bridges, some of which are over a hundred feet long, take ten to fifteen years to become fully functional, but they’re extraordinarily strong – strong enough that some of them can support the weight of fifty or more people at a time. Since the bridges are alive and growing, they gain strength over time and apparently survive for hundreds of years.