But first some good news! After days of patiently putting up with my rants about the weather you certainly deserve it 🙂 I am pleased to report that finally the weather has take a turn for the better. Believe it or not, on Monday, the temperatures plummeted from a sizzling day temperatures of 47 0 C to a pleasant evening at 27 0 C.

A thunderstorm accompanied by a shower overcame the sun (for the moment at least) and brought cheer right back into our lives. Even the staid seasoned trees look positively thrilled – clean green and fresh. I cant help but be infected by their silent but all pervading joie-de-vivre.

On the flip side, several flights were delayed or cancelled. But the respite couldn’t have come at a more timely juncture. Things were quite awful in most parts of the country and temperatures at the India-Pakistan border were higher by 10 degrees or more. Actually am not sure there has been any relief for the army jawans who patrol the borders in the most unbelievable heat and dust of the Thar desert. According to newspaper reports, they were able to roast papad by just placing it on the hot sand and cook rice by just keeping it out in the sun for 3 hours.

And then there was this tragic incident. A villager, while entertaining guests, forgot about his camel left out in the heat with his legs tied. When he remembered and went out to release it the camel turned violent. He picked him by the neck and threw him down, he then chewed off his master’s head. The camel went berserk and 25 men struggled for over 6 hours to bring it back under control. Poor camel – the heat must have literally fried his brains (my sympathies and condolences to the villager’s family).

That’s all on the weather front for now at least – for this isn’t the end of summer. So as they say cheer up the worst is yet to come. And memes like this are bound to crop up (again and again) before the mangoes bid their final adieu for the season. 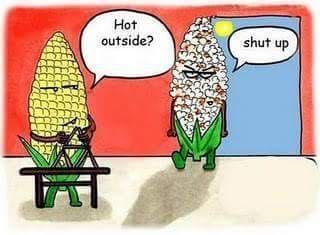 And now on to Moonshine – Chapter 61 and Calvin. All those rooting for Hobbes raise your hands 😀

Quotes for the day

“Don’t knock the weather. If it didn’t change once in a while, nine out of ten people couldn’t start a conversation.” ― Kim Hubbard

Before you go, do leave me a note, about the weather if nothing else (go ahead make me nervous)